While women with Turner's syndrome can expect to live a long and healthy life, there are several disorders which are known to be particularly common, many of which are preventable if simple health checks are undertaken. The problems that are more common in an adult with Turner's syndrome are being overweight, osteoporosis (thinning of the bones), high blood pressure, diabetes, an under active thyroid gland and kidney disease.

Body weight is determined by the amount of calories taken in the diet and the amount of calories burned up. The burning up of calories is reduced in anyone of short stature and women with Turner's syndrome are, therefore, often overweight. Body weight needs careful monitoring to prevent obesity. Careful attention to diet and exercise are required to bring about weight loss. Weight gain can also occur with an under active thyroid gland and with some forms of hormone replacement therapy. Being overweight can make high blood pressure and diabetes more difficult to control.

Osteoporosis is a condition where the mineral content of the bone is reduced and the bones are more likely to fracture. Osteoporosis is common in Turner's syndrome because of a lack of oestrogen and, for the most part, it is completely preventable by taking oestrogen replacements. In nearly all women with Turner's syndrome, the ovaries fail to make oestrogen and no menstrual periods occur. All women with Turner's syndrome, who have no periods, should take hormone replacement therapy (HRT). There are many forms of HRT available and it may take a lot of experimenting to find one that suits each individual. In addition to HRT, there are other measures which can help increase bone strength. In particular, keeping up a healthy amount of weight bearing exercise, such as walking, jogging or badminton, improves bone strength. Calcium in the diet is also important and, if you are someone who eats very few dairy products, then calcium supplements in tablet form may be advisable.

A high sugar level in the blood is called diabetes. If diabetes is going to become a problem in Turner's syndrome, it is usually in the older age group. The risk of diabetes is greater in women who are overweight and who have a diet high in sugar. Because diabetes can exist for many years before it becomes obvious, routine checks of the urine should be undertaken, to look for mild forms of diabetes. Many of the complications of diabetes, such as eye disease, can be prevented by early detection and treatment of raised sugar levels.

The thyroid gland becomes under active in about 10% of women with Turner's syndrome. An under active thyroid can cause lethargy and weight gain and a simple hormone tablet of thyroxine completely restores the body's thyroid function. Under activity of the thyroid gland can occur at any age and regular blood tests are required in order to detect it early.

Kidney disease is more common in Turner's syndrome, for several reasons. As mentioned above, both diabetes and high blood pressure can damage the kidneys. In addition, the kidneys can occasionally be malformed in Turner's syndrome, sometimes making urine and kidney infections more common. Careful monitoring of kidney function is an important part of health care, because attention to blood pressure and diabetes can prevent further damage.

One of the most common problems for children with Turner's syndrome is ear infections, thankfully they do not usually continue to cause problems in adults. However, having a ‘glue ear’, ‘grommets’ and inner ear operations can all affect the hearing, making deafness in adulthood a frequent problem. As hearing loss can be very gradual, deafness often goes unnoticed. Formal hearing tests in a department of Ear, Nose and Throat (‘ENT’) surgery are often advised in women with TS.

In order to keep an eye on the disorders described above, it is suggested that every woman with Turner's syndrome should see a doctor at least once a year for monitoring of the following:

We have a new Cardiac Alert Cards - these are card that any girl or woman with TS can carry to alert paramedics, doctors, nurses or indeed any other health care professionals about the possible heart complications seen in TS.

Our thanks to the team at Oxford University Hospital especially Dr Helen Turner, Dr Elizabeth Orchard and Emma Weingart for their dedication to their patients in writing this card. We will be circulating them as widely as possible at TSSS and Health Care Professional events throughout the country.

Should you wish a free cardiac alert card please send a SAE to the TSSS office and we will post one out to you. 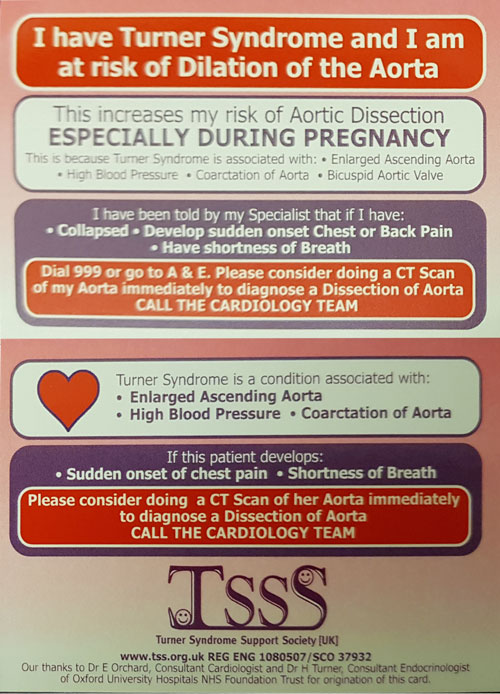 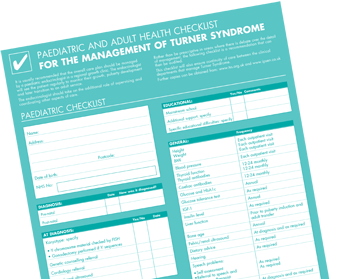