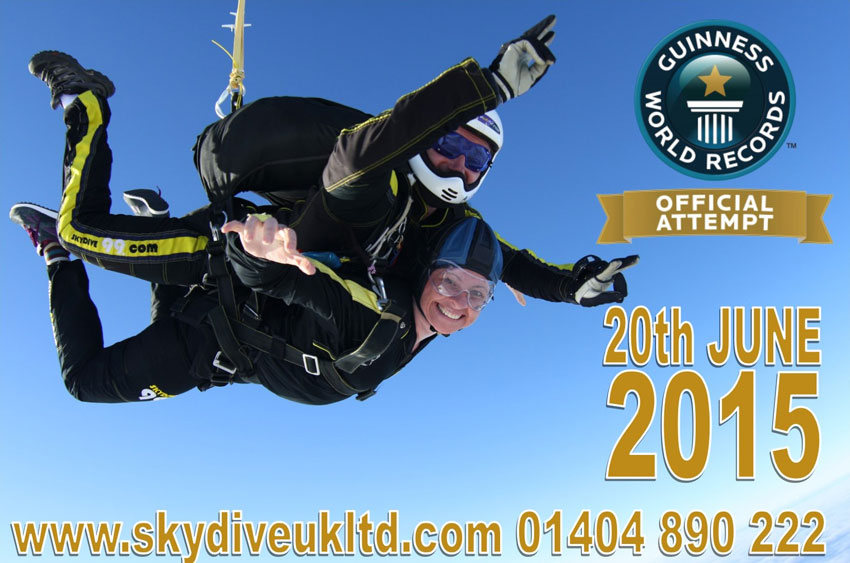 “Almost anyone can skydive as long as they are over 16 years of age. Experienced tandem instructors will be looking after you. All you need to do is relax and enjoy the most amazing rush in your life!” said Jason Farrant, managing director of Skydive UK.

The vast majority of tandem skydivers taking part in the Guinness World Record attempt will raise money for charity. This is going to be a huge charity event looking to raise around £100.000 for different causes. All participants will jump from 15.000 feet which is the ultimate skydiving experience. This is the maximum height you can jump from without an oxygen supply. Daredevils will get 60 seconds of freefall and approximately 5 minutes under the canopy.

The registration for the event opens to the general public on Monday, the 2nd of February 2015. Guinness World Record attempt will be on Saturday 20th of June 2015. 150 spaces are already taken by the supporters of certain charities, just under 200 spaces are open to public.

The current Guinness World Record for “The most tandem skydives in 24 hours” is 281. It is also held by Skydive Uk.

“We have the experience in hosting massive events like this, but this year we want to go just a little bigger to break the record again. Skydiving is our world and we would like to see more and more people getting involved in it” said Jason Farrant.

Last year one of the participants liked it so much, he went back up and jumped three times. The first plane went  up at 6am (sunrise). The last landed with the sunset at 10pm. The event was overseen by impartial judges to make it official and guarantee the place in the Guinness World of Records Book.

Aija Stikane, Skydive UK, This email address is being protected from spambots. You need JavaScript enabled to view it. 01404 890 222/44

NOTE: Skydive UK is one of the largest skydiving schools in Europe with 3 of the fastest jump planes in the world. Every year around 3000 people do their tandem skydive at Skydive UK. At least 200 learn to skydive solo and become a part of this very unique sport. Skydive UK does approximately 25 000 sports descents a year. www.skydiveukltd.com