The following description of Turner Syndrome (TS) and explanation of some of the issues involved in living with Turner syndrome are not definitive and a doctor or endocrine specialist should always be consulted whenever a diagnosis of Turner syndrome has been given.

The Turner Syndrome Support Society [UK] and other International Turner Syndrome support groups can help with practical information on living daily with TS and can in most cases offer contact with other girls and women with TS and their families. Information about Turner Syndrome can be found on the internet and in books; sadly this information is not always correct, and the TSSS therefore strongly recommends that anyone concerned about TS should consult a health professional who specialises in Turner Syndrome.

Turner Syndrome (TS) is a chromosome abnormality affecting only females, caused by the complete or partial deletion of the X chromosome. The incidence of TS is approximately 1:2000 live female births.

Confirmation of a diagnosis of TS is by karyotype but a suspected diagnosis can be made by a series of characteristic physical features i.e. web neck, broad chest and widely spaced nipples, low hairline and increased carrying angle of the elbows and other features. Two main clinical features of TS are short stature and non-functioning ovaries. Diagnosis can be made at birth if, for instance, a newborn needs heart surgery because of coarctation of the aorta or because of oedema of the hands and feet. Pre-natal diagnosis is sometimes made by chorionic villous sampling, amniocentesis or ultra sound. However, most girls are diagnosed in early childhood when growth fails or later when the absence of a pubertal growth spurt and development of secondary sexual characteristics become apparent.

Turner Syndrome is named after an American endocrinologist Dr Henry Turner who, in 1938 described seven women patients with similar physical features including short stature and the absence of female sexual characteristics, increased skin folds in the neck and a wide carrying angle of the arms. Earlier [1930] a German paediatrician, Otto Ullrich, had described the same physical characteristics in female patients.

Chromosome analysis [karyotype] is how a diagnosis of TS is confirmed.

Chromosomes are genetic material inherited 50/50 from both parents. Normally each cell in the body has 23 pairs of chromosomes which make 46 chromosomes in total. One pair of chromosomes are the sex chromosomes and these determine the sex of a baby. In a male there will be an X and a Y chromosome[46XY] and in a female there will be two X chromosomes [46XX]. In TS there is only one X chromosome instead of the usual two [45X or 45XO] the O represents the missing X chromosome. The missing X chromosome, [from either the mother’s egg or the father’s sperm] is an accident and is lost during the cell division that follows conception. 45XO is known as classic TS. Sometimes the X chromosome is missing from only some of the cells [46XX/45XO] and this is known as Turner mosaic. There are a number of other variations in the karyotype for TS, including ring chromosomes. Sometimes a small part of a Y chromosome may be present in TS this is known as mixed gonadal dysgenesis. A geneticist will give a full description of a karyotype and genetic counselling is recommended for all those diagnosed as having TS.

The term ‘syndrome’ is used to describe a collection or combination of symptoms which result from a single cause, it does not necessarily mean that all are present in the person who has a syndrome. There are number of physical features and clinical characteristics which may or may not be present in the girl/woman with Turner syndrome. The following is not a comprehensive list but gives some of the possible features of TS:

Everything you need to know 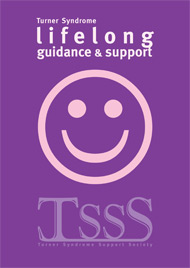 Turner Syndrome Lifelong Guidance & Support
Everything you need to know about Turner syndrome. 100 pages containing as many aspects as possible of living daily with the syndrome, from prenatal diagnosis through to recommended health checks for adult women with TS. Helpful tips for parents and teachers, information on footcare and personal experiences of life with TS and much, much more.
Read more